Herbal antibiotics have long been used by herbal healers to ward off colds and flu, clear infections and speed wound healing.  Now, they may be moving back into the mainstream as an alternative for bacteria that have become resistant to synthetic antibiotics. 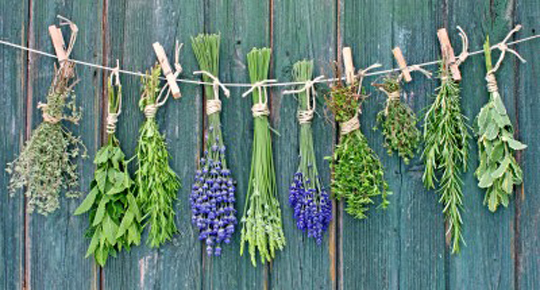 Natural Antibiotics
Most of us think of antibiotics as liquid or pills you pick up at the pharmacy, but these compounds were originally developed from naturally occurring sources. Many common foods and herbs (and some not so common ones) act as antibiotics, such as honey, garlic, onions, licorice root, ginger, sage and many others.

1. Garlic
The medicative features of garlic derives from an ingredient called Active Allicin, known for its ability to fight common viruses, bacteria and fungi. Garlic has been used for thousands of years throughout the world as a powerful antidote for various chronic diseases, pain, infection or even plague. Research shows that garlic contains many antioxidants that protect and strengthen the immune system. To this end, people with no stomach problems can use 2-3 cloves of garlic per day.

2. Manuka Honey
Compared to other honey types, manuka honey is highly concentrated in antibiotics. In some countries people still use wild honey to treat the burns or to heal infections and wounds. Manuka Honey can be used daily, along with other herbs to improve digestion and absorption of other drugs.

3. Green tea
Green tea contains epigallocatechin gallate, a substance which proves extreme effectiveness in fighting oral bacteria. Green tea has many other benefits for health, including the ability to fight against body fat. Regular use of green tea gives the body a natural antibiotic.

5. Echinacea
This is a powerful herb, traditionally used to treat open wounds, to reduce cellulite, to prevent diphtheria, septicemia, syphilis and other bacterial infections. Echinacea is also recognized as an outstanding stimulant for the immunity system, effectively fighting against colds and flu, but also against dangerous bacteria such MRSA.

6. Goldenseal
This herb has been used for centuries by Native Americans against various infections, ulcers and venereal diseases. Goldenseal prevents bacteria growth due to an active ingredient called berberine.Today, the plant is often used to treat gums, mouth sores, sore throat, respiratory infections, and even diarrhea.

8. Grape Seed Extract
Research shown that grape seeds contains powerful antioxidants fighting against free radicals in the cells and stimulating the immune system, which aids the prevention of cancer and blood pressure reduction, but also can be used to prevent or treat Alzheimer’s disease.