Spices are incredibly important in the kitchen as they flavor the dishes and make them have particular tastes. However, spices also come with medicinal properties and can be used to treat or prevent a large variety of diseases and conditions. We have prepared for you a list of spices that can also be used as medicines and that can treat important health problems. So, make sure you include them on your next shopping list, if you don’t have them already. 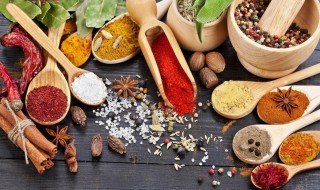 Cinnamon tops the list as one of the world’s oldest spices. Cinnamon is bascially the tree’s inner layer that is dried and then rooled. That’s how those flavorful and scented cinnamon sticks appear. For thousands of years, this spice has been used to reduce the congestion and to treat a runny nose and it is also a warming expectorant. Thus, it is extremely efficient in treating colds and flus. Mix your ginger tea with a cinnamon stick for a better effect. You can also flavor your muesli and porridge with ground cinnamon.

India has given us a wide array of powerful and beneficial spices and turmeric is one of them. This spice contains curcumin, an efficient antioxidant that reduces the chances of developing cancer. At the same time, turmeric has antifungal, antibacterial, antiviral and anti-inflammatory properties and it has been used by the Chinese, Thai and Indian medicines for thousands of years. Turmeric is a great spice for rice, so add it to your rice dishes. You will benefit from both a special taste and antioxidant effects.

Paprika is condiment that is widely used in the Spanish dishes. You can choose from smoked, mild, hot or sweet paprika to use in your kitchen. This condiment is also high in luteolin, betacarotene, quercetin, capsanthin and various other powerful antioxidants, keeping the cancer at bay. Add paprika on your meat dishes to make them tastier and more beneficial for the health.

These small little stars have been used for hundreds of years to freshen the breath and calm the digestion. The anise has carminative and stimulant properties and it is extremely useful in colic and flatulency. Also, besides being an aromatic digestive, it can also reduce bloating and nausea. Moreover, anise is incredibly efficient for colds and coughs because it helps expectoration. Add anise in your teas or in your vegetable soups to benefit from its amazing properties.

Cloves are believed to be the first breath fresheners in the world. They have long been used by the Chinese medicine and recently, various studies have found out that these spices are also rich in antioxidants, being compared to the berries. Also, cloves can reduce flatulence and bloating and promote the healing of the digestive system. Add cloves to your desserts or dishes for a better culinary and medicinal experience.

There are numerous alternative and traditional treatments that include chilli and cayenne pepper. They are useful for the colds and flus because they heat up the organism and decongest the nasal passages and the sinuses. At the same time, they improve the circulation. The capsaicin in these peppers has antioxidant and anticancer properties and it can also help relieve the pain. Add this hot powder to burgers, rice, meat of soups.