Leptospirosis is a bacterial infection that is spread by animals. It is caused by leptospira interrogans, spiral-shaped bacteria which multiply in the kidneys of affected dogs, rodents, and other mammals. 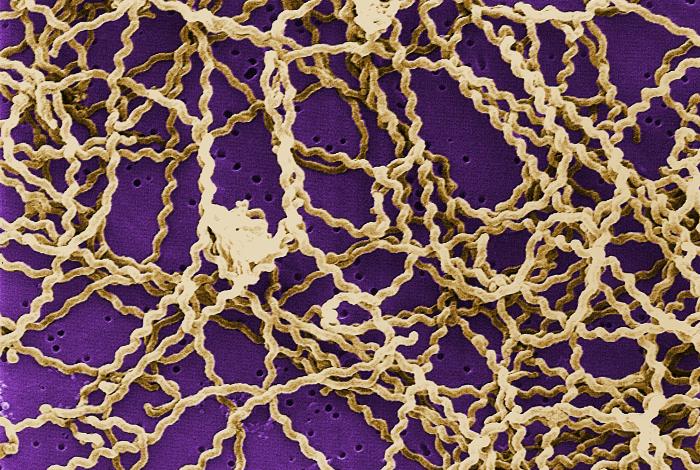 Also known as Rice-field fever, Mud fever, Stuttgart disease, Swamp fever or Swineherd’s disease, leptospirosis can also be transmitted to humans by touching water or soil contaminated with the urine of animals infected with these bacteria.

People whose occupations expose them to wild animals, farm animals or contaminated soil and water are prone to catching this disease. Veterinarians, farmers, miners, slaughterhouse workers, disaster workers are only some categories with an increased risk of getting leptospirosis.

Symptoms vary from mild to acute depending on how severe the infection is. They can arise a couple of days or even four weeks after the exposure to the bacteria, and some people might not have any symptoms. Leptospirosis symptoms are very similar to other diseases such as malaria, dengue fever, brucellosis, hantavirus and they vary from headaches, muscle pains, chills and reddish eyes to high fever, vomiting, aches, rashes, diarrhea, abdominal pain, and jaundice.

How does the disease evolve?

When they are present, symptoms usually occur abruptly in the first phase. Some patients manage to resolve the symptoms, and the disease does not progress to the second phase, while others briefly recover but relapse with more acute symptoms and even organ damage (lungs, liver, and kidney failure, ). This is the second phase of the infection, called Weil’s disease. If it is left untreated, it might not be treated for several months. About 90% of people experience only mild symptoms which last 5-7 days.

The disease is diagnosed by testing the blood for antibodies to the bacteria: creatine kinase, complete blood count, urinalysis and liver enzymes. When diagnosed, doctors usually prescribe antibiotics (penicillin G, ampicillin, amoxicillin or erythromycin), which have proved to be effective in fighting the spiral-shaped bacteria. The prognosis of this disease is generally good if symptoms do not progress and become more severe. Some people may require antibiotics or hospital care.

The disease can be prevented by avoiding areas with stagnant water, such as puddles or lakes. Wear rain boots, especially during the rainy season and avoid swimming or scuba diving in such waters. Wash your hands and feet after coming in contact with water or animals. If you are continuously exposed to high-risk areas, you can take 200 grams of amoxicillin or doxycycline per week. This will dramatically decrease the risk of catching this disease.

Scientists are also working on a vaccine which is currently tested in Cuba. Although the results are promising, the vaccine is not yet licensed. More long-term studies are needed to prove that it is safe for widespread use.