Spikenard (Nardostachys jatamansi) is an aromatic plant native of the Himalayas of Nepal, China and India, whose amber-colored essential oil was sacred not only to Indians, but also to Egyptians, Greeks and Hebrews. The traditional uses of spikenard, as an anti-inflammatory and a sedative (having the power to bring about a sacred balance in the body and spirit of those who use it), are being confirmed in the present by numerous scientific studies. 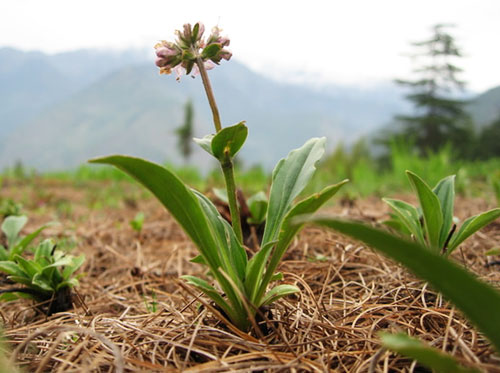 Spikenard is an ingredient for Kyphi, the sacred Egyptian temple perfume. It was also found as the main component of a solid ointment used in the embalming of Tutankhamun.

Spikenard was also part of the sacred incense offered in the Jewish Temple of Jerusalem and is mentioned a number of times in the Tanakh (the canon of the Hebrew Bible).

In Book 18 Homer’s Iliad, it is said that spikenard was used by Achiles to perfume the body of Patroklos.

In the Gospel of John we can read that spikenard was used in Bethany by Mary, sister of Lazarus, to anoint Jesus’ feet.

Spikenard is, in the hispanic iconographic tradition, a symbol associated with St. Joseph, this, according to the Vatican, being the reason for which Pope Francis has chosen to include it in its papal coat of arms.

Never use any essential oil directly on the skin. Dilute it with sunflower, olive, sesame or sweet almond oil (1 drop of essential oil per 1 teaspoon of carrier oil).

For bath, dilute 8-10 drops of essential oil in a cup of epsom salt or milk.

For internal use, dilute 1 drop of essential oil in 1 teaspoon of honey.