Lobelia is considered to be likely unsafe for most people. In moderate to large doses it can cause a series of alarming symptoms and can even induce coma. Still, it was considered a love charm by some Native American tribes, although it was also used as a powerful emetic, a property that gained it names such as pukeweed or vomitwort. Lobelia seems to have quite beneficial effects on the respiratory system and many argue that it can be a cure for smoking, but the most wonderful aspect of its actions is its capacity to adapt the way it heals the body to the specific character of each case. 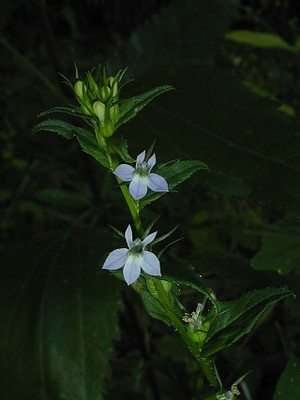 Lobelia inflata is also known as Indian tobacco, because many Native American people used to smoke it, either as a replacement for the actual tobacco plant, or as a means to cure bronchitis or to relieve cough or asthma. It was also used to treat convulsive disorders such as epilepsy, hysterical convulsions and tetanus, and inflammatory disorders such as diphteria or tonsilitis, and also all sorts of colds, fevers, sores, abscesses and traumatic injuries. But the earliest and most extensive use of lobelia was that of an emetic, either for removing actual poisons from the body, or to counteract sickness produced by witchcraft. The natives were very creative and efficient in using this plant especially for, but not limited to medicinal purposes. The Iroquois used the root to treat leg sores, venereal diseases and ulcers. The Cherokees used a root poultice for body aches. They also used the plant for bites and stings. The Crows made use of it in religious ceremonies. And some Native American people believed that if the finely ground roots were secretly added to the food of an arguing couple they would start to love each other again.

For a time, lobelia was used for the treatment of smoking addiction, due to the presence of lobeline, which was thought to be similar to nicotine in its effect on the body. But in 1993 the FDA reported that products containing lobeline were not effective in helping people quit or reduce smoking and researchers now think that lobeline may actually reduce the effects of nicotine in the body (especially those related to the release of dopamine).

But the most important property of lobelia is its ability to go exactly where the problem is located and express its medicinal virtues right the way it’s supposed to. This can make quite a difference in situations that could go either way. One example is the case of threatened miscarriage. When a fetus is dead, or dangerously weakened, lobelia will cause an abortion and so it will prevent a fatal infection. If the fetus is healthy but the mother is weak, it will heal and strengthen the mother, enabling her to carry the child safely until due time. And in two similar cases of large abscesses, the herb expressed its healing power differently: it drained the abscess internally in the stronger boy, and externally in the weaker one. Lobelia is known today as “the thinking herb” for a good reason: It goes right to the place in the body wherer its powers are needed and carries out exactly the adequate action. And it even tells you when you have exceeded the safe limit: You will vomit it back up immediately.

Lobelia is available in liquid form, as extracts and tinctures, and also as a dried herb, in capsules and for teas. For an infusion, pour 1/4 to 1/2 teaspoonful of the dried herb into 1 cup of hot boiled water and let steep for 10-15 minutes. Drink three times a day. If you have a tincture, take 1/2 ml 3 times a day.

Don’t forget that lobelia is considered to be a toxic herb and it is important to begin with lower dosages and increase the dosage gradually. You should never surpass a dosage of 20 mg a day. Overdose may cause serious toxic effects such as sweating, convulsions, fast heartbeat, very low blood pressure, collapse, coma, and possibly death. A quantity of 0.6-1 g of the leaf is said to be toxic, and 4 g may be fatal.

Don’t take lobelia if you have gastric or intestinal ulcer, Crohn’s disease or inflammatory bowel disease, as it can further irritate the gastrointestinal tract. Also, if you are taking lithium, you should consult with you doctor before using lobelia, as it retains the lithium in the body and this may have serious side effects.