Turmeric was known for its medicinal properties even in the ancient Vedic culture of India. Its therapeutic range is impressive, covering almost everything from gingivitis to post surgery pain and fatigue, and from gastric ulcer to atopic dermatitis, and what is even more impressive is the fact that almost every curative value of turmeric is due to the presence of only one substance – curcumin, which has been repeatedly proven by different scientific studies to be an efficient anti-ageing, anti-inflammatory, antioxidant, neuroprotective, antidepressant, and antiproliferative agent, and also a preventer against Alzheimer’s disease, cardiovascular disorders, and type II diabetes. It is thus a very good idea to either include turmeric in as many dishes as you can, or to use it for preparing some particularly delicious and healthy drinks. Follow these recipes or simply use your imagination. Just make sure to add every time at least a pinch or black pepper, which contains a specific substance – piperine – that not only is a strong anti-inflammatory in itself, but, and more important, by inhibiting the hepatic and intestinal glucuronidation, increases the bioavailability of curcumine by 2,000 percent (as proven by a study published in Planta medica in 1998)! 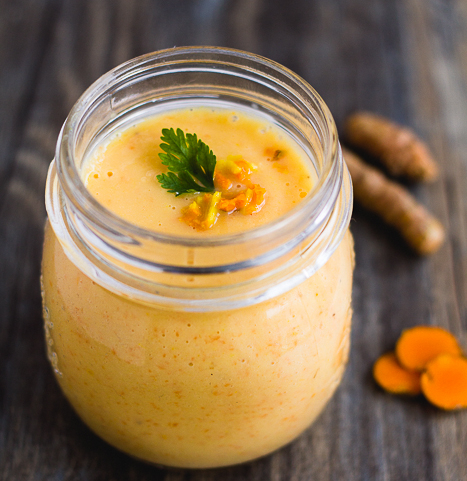 Mix ¼ cup of turmeric powder, ½ teaspoon of black pepper powder and ½ cup of filtered water. Put all the ingredients in a pan, moderately heat the mixture and stir until you obtain a thick paste. Store the paste in a jar in the refrigerator. Take 1-3 teaspoons a day, before a meal, or use the paste to prepare more delicious drinks.

While piperine generally enhances the effects of curcumin, most notably the anti-inflammatory ones, it seems to nullify its antidiabetic and antioxidant activities, as was suggested by a study published on PLoS One in 2014.