Studies have shown that both elderly and healthy persons can improve their cognitive performances through one simple gesture: consuming red beet juice more often. 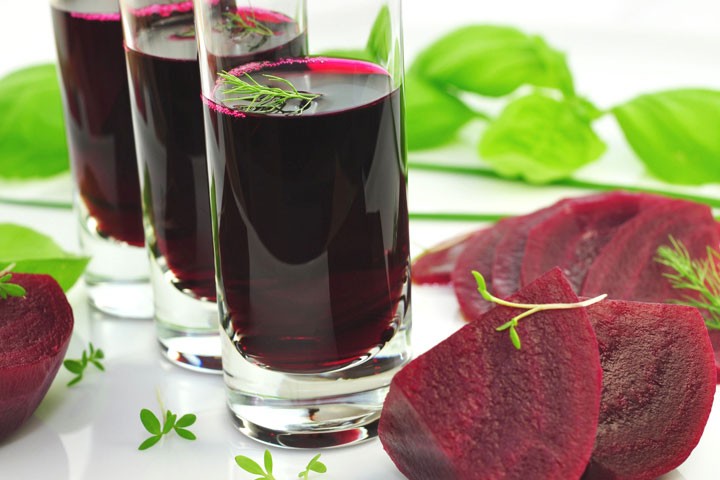 Beet juice is more efficient than coffee in stimulating the brain

A more recent study demonstrated the remarkable role red beet has in promoting brain’s health. 40 healthy persons participated in the study and those who drank more than 450 ml of beet juice performed better at the cognitive tests than those who drank apple or black cranberry juice.

Other researchers from the Translational Science Center analyzed the nitrates’ effect on 14 adults aged over 70 on a 4-day period of time. Some of them were given a breakfast high in nitrates (450 ml red beet juice), while others received a poorer meal from this point of view.

Results showed that after consuming a meal rich in nitrates, the elderly had an obvious increase of the blood flow in the white matter from the frontal lobes – those areas of the brain most often associated with the degeneration process known to be leading to dementia and other cognitive disorders. The nitrates contained by the red beet raise the values of the blood stream at the level of pre-frontal cerebral cortex in healthy adults.

450 ml beet juice – the dose used in the studies

It seems miraculous that a single dose of red beet juice (450 ml) can produce such an immediate and remarkable improvement in the cognitive functions.

Nitrates are the ones responsible for this effect. Red beet juice contains high amounts of nitrates, which are transformed into nitrites by the bacteria located in the mouth. Nitrites help the blood vessels dilate, stimulating the bloodstream, the oxygen and the nutrients, leading them towards parts of the body which are not properly supplied with oxygen. These are some areas within the brain that, once with the aging process, become less and less oxygenated. Bad brain oxygenation has been associated with dementia and short cognitive functions.

The discoveries resulted from this study can help those who are searching for an alternative to replace coffee and to focus their attention on beet juice. Unlike coffee and other psycho-tonic beverages, red beet juice is definitely a functional product and a more nurturing and safer agent in the long-term maintenance of the brain.

Moreover, the consumption of this drink provides even more benefits for health, especially regarding the vascular system, cancer prevention and liver sustainability.

Previous studies have shown that the nitrates within vegetables improve the endothelial function and lower blood pressure.

Significant amounts of nitrates are to be found not only in red beet, but also in other vegetables such as cabbage, spinach, celery and other green leafed vegetables.