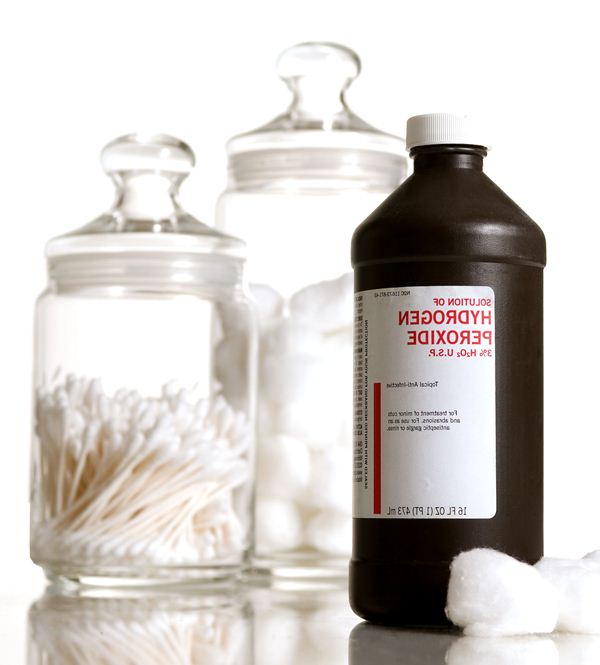 It’s important to know that you should use food grade hydrogen peroxide (it means that it has no additives), and you shouldn’t ingest it.

An external ear infection (“otitis externa”, “swimmer’s ear”) is provoked by a viral or bacterial infection. If you have too much moisture in your ear or live in an area with high humidity, the infection can become aggravated. The inflammation of the external ear has the following symptoms: discharge of clear fluid, redness, pain, itches.

If you’re experiencing one of these symptoms, you can use 3% hydrogen peroxide to treat it.

How can you treat the ear infection with hydrogen peroxide? First, you need to lean your head aside and pour a couple of hydrogen peroxide drops into the affected ear. Wait for 10-15 seconds and lean your head to the other direction to let the solution be removed. Use an ear stick to slowly eliminate the extra earwax from the ear. You have to repeat this process 2-3 times a day until your ear gets healthy.

Ear wax (cerumen) is a yellow substance that is secreted by our ear. You don’t need to use a special treatment to remove the ear wax because it fades naturally. But there are cases where the wax can block your ear. You don’t have to worry if this is your case because you can use hydrogen peroxide to clean your ears. You need to buy a 3-5 ml syringe and a 3% hydrogen peroxide bottle.

Pour 1-3 ml of hydrogen peroxide into the syringe Put your head on one side and pour a few hydrogen peroxide drops into the ear. Then you need to shake the liquid in the ear canal slowly by covering it with the ear flap for 10-15 minutes. Lean your head to the other side. If you have extra wax in the external ear, use an ear stick to remove it. Do this process with the other ear too.

Don’t try to remove the wax from inside your ears because you can shove it further into the ear, thus creating a grave damage, infection or a blockage.

Moreover, you can use distilled water to clean your outer ear if the hydrogen peroxide provokes irritation to your skin.

Don’t use hydrogen peroxide in cleaning wounds or cuts because it can harm the fragile tissues and slow down the process of healing.

If you have an ear infection that has the following symptoms: severe pain, discharge of blood from the ear, runny nose, cough or fever over 39°C, seek medical help immediately. In addition, don’t use hydrogen peroxide for a punctured or perforated eardrum, or for inner ear infections.