What’s all the fuss about green tea anyway? This beverage offers plenty of healthy benefits due to its high nutrients known as epigallocatechin gallate( EGCG for short). The use of tea leaves first originated in the southwest area of China more than 3,000 years ago. It was used by people just for chewing and eating, but over time the use of leaves and buds from the green tea tree expanded. People began to use in cooking and they added it in boiling water to flavor the water they drunk. Let’s see some of the reasons why one should drink green tea regularly. 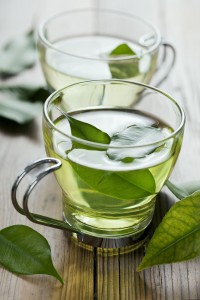 Green tea increases the metabolism. The polyphenol found in green tea works to intensify levels of fat oxidation and the rate at which your body turns food into calories. Its active ingredient, EGCG also increases the rate at which fat is burned in your body. It targets belly fat. The EGCG in green tea, like other catechins, activate fat-burning genes in the abdomen to speed weight loss by 77 percent

Scientists believe that green tea works on the lining of blood vessels and at the same time helping them stay relaxed. It also protects against the formation of clots, which are the main cause of heart attacks.

Green tea reduces the cholesterol levels in the blood and improves the ratio of good cholesterol.

Green tea delays the deterioration caused by the diseases like Alzheimer and Parkinson. Various studies carried out on lab animals showed that green tea protected the brain cells from dying and restored the damaged cells.

Theanine is an amino acid found in green tea leaves. This substance is thought to provide a calming and tranquilizing effect and benefits all tea drinkers. Just a few cups a day will unwind you.

Tea catechins are strong antibacterial components and antiviral agents. These are effective for treating everything from influenza to cancer. Some studies reveal the fact that green tea also inhibits the spread of many other diseases.

Green tea helps with wrinkles and the other signs of aging. This is due to their antioxidant and anti-inflammatory properties. Both animal and human studies have shown that green tea applied topically can reduce some of the damage done by the sun exposure.

Green tea is a great  source of antioxidants, so it makes perfect sense that it reduces risks of various types of cancer. This includes: breast cancer, prostate cancer and colorectal cancer. Just keep in mind that adding milk to your tea is not a good choice. This reduces the antioxidant power.

Chinese use green tea to control the glucose levels. The studies performed on lab animals showed that green tea could play a significant role in preventing diabetes. This beverage is full of flavonoids which can help increase the insulin in one’s body. Drink a cup of green tea every day to see how it works on your system.