Dandelion (Taraxacum officinale) was traditionally used for treating stomach cramps, hence its scientific name: taraxi – agitation and akéomai – to heal (another etimology of this name is thought to be the Arabic word tarashqun – bitter herb, while the name dandelion is a corruption of the French dent-de-lion – lion’s tooth, referring to the coarsely toothed leaves). Nowadays, dandelion is still used for hyperacid gastritis, but its main use, confirmed by a number of scientific studies, is in treating liver and gallbladder diseases. 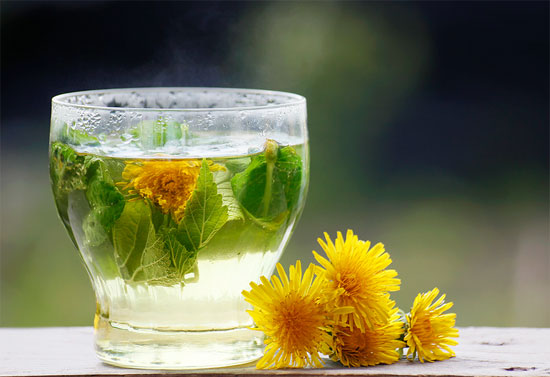 Scientific studies that confirm the hepatoprotective activity of dandelion

A study published in Environmental Toxicology in 2014 concluded that a dandelion leaf extract “was effective in the protection against sodium dichromate-induced hepatotoxicity and genotoxicity and, therefore, suggest a potential therapeutic use of this plant as an alternative medicine for patients with acute liver diseases.”

A study published in Pakistan Journal of Pharmaceutical Studies in 2014 demonstrated that an ethanolic extract of dandelion leaves has “a protective effect against CCl4 induced liver tissues toxicity.” A previous study, published in Journal of Ethnopharmacology in 2010, suggested that a root water-ethanol extract of dandelion root has “a therapeutic effect on CCl4-induced liver fibrosis through the inactivation of hepatic stellate cells and the enhancement of hepatic regenerative capabilities.” Another study, published in Acta Biologica Hungarica in 2010, demonstrated “the hepatocurative potential of sesquiterpene lactones of Taraxacum officinale on CCl4-induced liver toxicity in mice.” And a study published in Food and Chemical Toxicology in 2010 demonstrated that “two polysaccharides from Taraxacum officinale, attenuate CCl4-induced hepatic damage through the modulation of NF-kappaB and its regulatory mediators [inducible nitric oxide synthase (iNOS), cyclooxygenase (COX)-2, tumor necrosis factor (TNF)-alpha, and interleukin (IL)-1beta].”

A study on mice, published in Journal of Medicinal Food in 2012, “clearly demonstrate[d] the hepatoprotective effect of Taraxacum officinale against the toxicity induced by acetaminophen. The possible mechanisms involved include its scavenger activities against reactive oxygen species and reactive nitrogen species, which are attributed to the content of phenolic compounds in the extract.”

The results of a study published in Food and Chemical Toxicology in 2010 suggested that “the aqueous extract of Taraxacum officinale root has protective action against alcohol-induced toxicity in the liver by elevating antioxidative potentials and decreasing lipid peroxidation.”