Thyme is known to have valuable properties since ancient Egypt, Greece and Rome, where it was used for embalming, as an incense in temples, and for flavoring cheese or alcoholic beverages, respectively. In present time, some of its medicinal properties have been demonstrated by scientific studies and many others are confirmed by everyday domestic use. One of the most significant is the overall energizing effect on the organism, which is due mostly to the fact that its main constituent, a volatile oil, can act pretty quick and simultaneously on the nervous, respiratory and digestive systems. 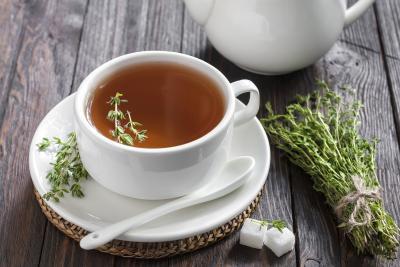 Thyme was considered since ancient times a symbol of courage (the name having its origin in the Greek word thymus, which means precisely that), being ritually given by women to their knights as late as the middle ages for strengthening the will and the mind. Echoes of this custom are now present in the appreciation of its strong anti-infectious, antidepressant and energizing properties. So, if you’re looking for a coffee substitute, don’t hesitate to give thyme a try. Take courage from a morning cup of thyme tea and see to the issues of the day with strengthened resolve and joy.

How to prepare it