Even amongst all the much-touted “superfoods” available on the market today, spirulina stands out. Including this blue-green algae, which has long been used in some parts of the world as a dietary staple, in a health-conscious regimen is an excellent choice. Daily consumption of Spirulina offers a wide range of health benefits, including those listed below. 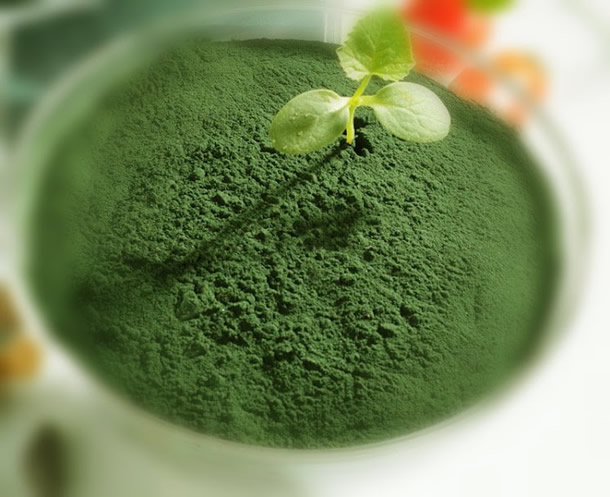 Spirulina is a natural “algae” (cyanbacteria) powder that is incredibly high in protein and a good source of antioxidants, B-vitamins and other nutrients. When harvested correctly from non-contaminated ponds and bodies of water, it is one of the most potent nutrient sources available. Spirulina contains up to 5 times more protein than meat – up to 65% in some instances, and contains as many as 100 different nutrients including many vitamins, potassium, copper, iron, selenium, zinc and magnesium.   It is now cultivated across the world and comes in a three main forms: flakes, powder and tablets. Spirulina is considered both a dietary supplement and a health food.

It was consumed by both the Aztecs and Mesoamericans up to the 16th century in the Mexico region, but was rediscovered in the 1960ʼs and has been growing in popularity ever since. Until recently this was mainly confined to the dietary supplement world, but its appeal has since broadened and it is now available in most health food shops too.

Spirulina has been shown to improve cardiac health in a number of ways. Firstly, in a 1988 study in Japan, it was found that spirulina lowers cholesterol levels and reduces the inflammation that occurs because of cholesterol accumulation in the blood stream. Since high cholesterol levels are a major risk factor for heart attacks, this is one way in which spirulina can be considered heart-healthy. It has also been shown that for those who are obese, taking spirulina daily can help lose weight and gain lean muscle mass, thus reducing another risk factor for cardiac arrest.

2. Fights Infection
Another health benefit from this superfood is its infection-fighting properties. Spirulina contains various infection-fighting proteins which help with the production of antibodies that are designed to recognize and eliminate disease-causing pathogens. It is made up of nearly 70% protein, making it one of the most protein-rich of all foods, and it also helps to fight infection by boosting the production of white blood cells which form such an important part of the body’s natural defense against infection and disease.

3. Reduces Allergy Symptoms
If suffering from allergies and tired of using traditional antihistamines, consider the use of daily spirulina. In a 2005 study published in the Journal of Medicinal Food, it was found that high doses of this algae helped to inhibit many allergic reactions in the body, particularly among those who suffer from allergic rhinitis.

4. Prevents Nutrient Deficiencies
Nutrient deficiencies are a problem both throughout the developed and developing world and if unchecked can lead to serious health consequences. Spirulina can help prevent or treat these deficiences since it is rich in all 8 essential amino acids, 10 non-essential amino acids, Vitamin B, zeaxanthin, betacarotene, beneficial probiotic bacteria and dozens of trace minerals and pathogen-fighting proteins. As nutrient-rich as it is, spirulina can be every effective in restoring adequate nutrient levels.

5. Detoxifies the Liver
Spirulina is very effective in detoxifying the liver and the body’s cells of various heavy metals and toxins. It is one of the best known cleansing agents for reaching deep into the body tissues and drawing out compounds such as arsenic, mercury, radiation, pesticides, cadmium, environmental carcinogens and synthetic food chemicals. Detoxifying at this level can give a significant boost to overall bodily health.

6. Helps Treat Blood Disorders
Spirulina has also been found to treat a number of blood disorders. One such blood disorder is anemia: spirulina helps to treat this condition by boosting the production of iron-rich red blood cells, particularly when taken in combination with Vitamin B-12. It is also rich in chlorophyll and phycocyanin and these compounds act as blood purifiers and rejuvenate the existing blood supply.

It is easy to see why, with all these health benefits, that spirulina is considered by many to be the foremost of the “superfoods”. For these benefits, it is necessary to consume several grams a day, but it certainly should be included in a nutrient-rich, health-concious diet.